On the 16th and 17th of August I bit the bullet and decided to put in the greenhouse drainage. Many of you will recall that with the rain over the winter we ended up with about an inch of standing water in the Greenhouse and it turned into a mud bath! In an attempt to prevent this happening again Vincent suggested having a ‘French Drain’. This is simply a drainage channel in the floor taking the water outside. 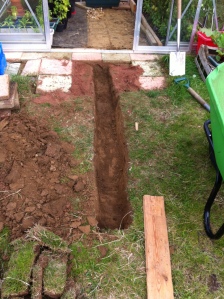 Firstly the paving slabs had to be lifted and stacked and the trench dug to about 8 inches depth. 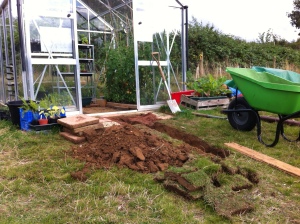 There has quite a bit of turf and soil to remove! 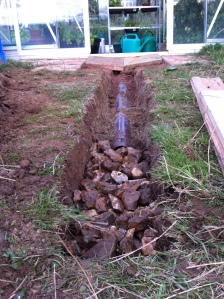 Next a plastic drainage pipe was layed in the trench, on top of an inch of sand. I had pre-drilled about 60 holes in the pipe so that water will percolate out. I used a mixture of Travis Perkins sand left over from the shed base and some of the ‘free’ sand which was dumped on Waterworks Lane. The end of the pipe has a small ‘Soak away’ made using stones, which gives a big surface area for the water to slowly drain into the soil. The pipe is surrounded by sand so that water will drain out of the pipe and hopefully into the surrounding soil. 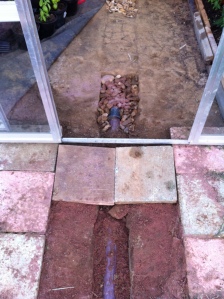 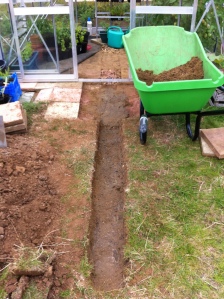 The pipe is covered with sand ready for the turf to go on top and new sand was used for relaying the paving slabs. 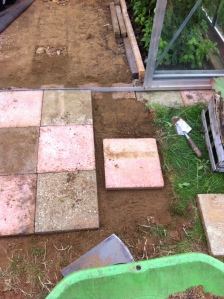 Finally the paving slabs were relayed about an inch higher than before so that they are flush with the lip of the door to stop people tripping over. There is still some work to do finishing the drainage inside the greenhouse and eventually I plan to pave the floor to make it flat.

One thought on “Greenhouse Drainage”